The Dark Ages and the Bonfire of the Vanities

Then along comes one Emperor Constantine in the Fourth Century. Christianity is by this point the official religion of the state and “immoral” “pagan” imagery is banished. Thus we have: the Dark Ages – beyond religious artifacts, and decorative arts – there is little representation of sacrilegious pleasures. Poor Medieval fellows eh, good thing they had the crusades to keep them busy.
Let there be LIGHT... and nudes.
And the Shadow of Censorship 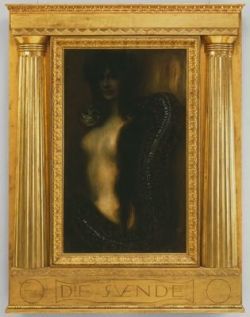 In the 19th Century, Classicism was taken to an extreme by the Pre-Raphaelites. While their strict adherence to Renaissance styles didn’t last, their works were very influential. 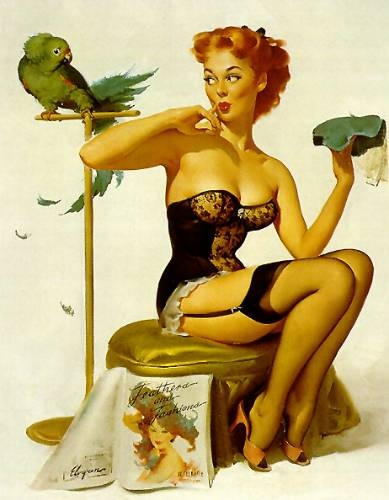 Early American influences in magazine and print illustration include Howard Pyle (1853-1911), his Brandywine school and students such as N. C. Wyeth (1882-1945). John La Gatta (1894 – 1976) and Andrew Loomis (1892-1959) were also major forces in magazine and advertising illustration. Meanwhile in Europe decorative Art Nouveau movements were also contributing to the artistry and styles of the times.
Lithography and then the birth of photography followed soon after were also bringing new techniques for printing. The adoption of the offset method at the turn of the twentieth century allowed for larger, faster and better quality printing. This made printed materials available to a vast public, posters of “pin-up girls” were now being mass-produced; the Golden Age of Illustration had begun.
Conveniently placed from 1880 to 1920, The Golden Age brought us development of economical high speed printing and an increased literacy. Creating a tremendous audience for the only available forms of mass communications at the time: Books, papers and magazines and bringing us artists such as: Alberto Vargas, and George Petty.
Calendar Girls & Candy Boxes
Mmmm... Mayonnaise... 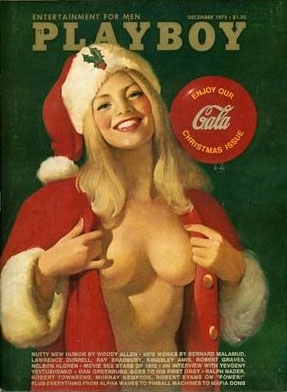 Many pin-ups were photographs of celebrities considered to be sex symbols. One of the most popular early pin-up girls was Betty Grable. Her poster was in the lockers of G.I.’s during World War II. Other pin-ups were artwork, often depicting idealized versions of what some thought a particularly beautiful or attractive woman should look like. Provocative images, particularly used in advertising, trod a thin line between sex and commerce; drawing on figures like Marilyn Monroe, or an anonymous sex symbol.

Additionally, there are several contemporary artists such as John Kacere – The subject of his Photorealistic paintings were exclusively the mid section of the female body. Although in the early 1980s he did branch away from this theme and included the entire body of a female in lingerie, only to then return to his original mid-section of the female body in 1988.

Perhaps more importantly there was also Haddon Sundblom – If anyone was responsible for the explosion of vibrant beautiful pitchwomen, it was this Chicago artist. Best remembered for his advertising work, specifically the Santa Claus advertisements he painted for The Coca-Cola Company in the 1930s, giving us the larger-than-life, grandfatherly Claus image which is still used by Coca-Cola to this day. Meanwhile his lush oil technique was influencing a roster of important pin-up artists.

The most famous being Gil Elvgren, who worked at Sundblom’s Stevens-Gross advertising agency along with such notable artisans as Al Buell, Harry Ekman, Bill Medcalf and Joyce Ballantyne. Their technique of using thick layers of paint to achieve a warmth and glow was dubbed ‘the mayonnaise school’.
While the art-world itself seems to have suffered something of a demise in modern times too – a subject which I could write a whole other lens on, but instead I shall simply furrow my brow while typing: Damien Hirst… and move right along.

If you, like me have more an eye for the sensual, than the sensational, and little to no interest in owning something as ugly as half a dead cow, but do appreciate the simple sensual beauty of the human form then Zazzle has some real gems for you. 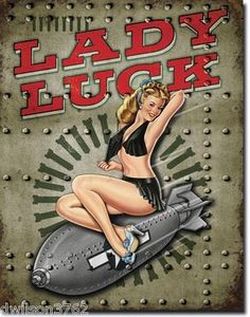